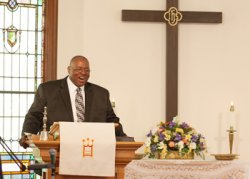 The Sunday bulletins at Bailey and Pleasant Grove United Methodist churches list the usual items: the order of worship, upcoming events, requests for prayers, the total offerings received so far this year.

But the bulletins for these two small eastern North Carolina churches also include an entry that is not typical.

“Pastor’s Weight Loss for Missions” reads the notice. It lists the number of pounds the Rev. Eldrick Davis has lost that week (typically one to three) and asks church members to donate a dollar or more for every pound shed. Donations benefit one of four mission groups, including youth missions and Bailey area ministries.

Davis, who weighed 450 pounds when he and church members hit on the idea, lost 135 pounds during last year’s bulletin challenge. Missions giving increased by $4,500. This year, the week following Easter, he launched a second challenge. Davis wants to shed another 100 pounds — and he’s asking his congregation to hold him accountable.

Coupled with the support and education he received through Spirited Life, a two-year health and wellness program offered to United Methodist clergy in North Carolina, Davis hopes to achieve his goal — a fit body weight of 200 pounds and renewed energy for ministry.

He acknowledges that his method may be unconventional. But after years of dieting, in which he lost weight only to gain it back, Davis has found that admitting his failures and asking for help may be the only way forward.

“There was some fear initially: ‘Should I be this public about my struggle?’” he said. “But it has given me the support and encouragement I need. I have put myself so far out there this time that there’s no turning back.”

Ready for a change

At one time, clergy were among the healthiest people in the world, living longer than other white-collar professionals. That’s no longer the case.

Clergy obesity is not just a health problem; it’s a financial problem. The cost to employers of obesity-related absenteeism, lost productivity and medical treatment is an estimated $73.1 billion annually, according to one study.

Davis, a 55-year-old native North Carolinian, knows what it’s like when ill health begins to compromise ministry and livelihood.

Ten years ago, he tipped the scales at more than 400 pounds and landed in the hospital with pulmonary hypertension. His doctors told him he would need to use portable oxygen for the rest of his life.

Soon after he was discharged, he couldn’t wait to get back into the pulpit.

His wife, Rematha, wondered how he was going to do that.

“He said, ‘God called me to preach, and I’m going to stand there with the oxygen,’” she remembered he told her.

For a while, that’s exactly what Davis did. Ultimately, he lost just enough weight so that he was able to preach without the aid of oxygen, but the episode was a sign of how fragile his health had become.

Then, in 2011, his bishop relocated him to Bailey, a small town about 14 miles from Wilson, N.C. In the months following the move, Davis put off locating a new gym and found himself without a doctor to prescribe his high blood pressure medication. During the Christmas holidays, he indulged in one too many holiday sweets.

One morning shortly after New Year’s, during his quiet time of prayer and meditation, he heard God ask him whether he was ready to lose his excess weight for good. After months of feeling “not quite as dead as Lazarus,” Davis said, he was ready for a change.

Just as he was getting up, a television commercial came on for Optifast, the meal replacement system. Davis saw it as a sign. He made an appointment for a medical work-up at a nearby clinic and ordered the shakes and bars at the heart of the plan.

A few weeks later, he signed up for Spirited Life and scheduled his first meeting with a wellness advocate.

Putting health on the back burner

“It’s very easy to put your own health on the back burner,” said Angela M. MacDonald, a wellness advocate with the Spirited Life program, who serves as a health coach for Davis and other clergy. “The expectation is that you will be a 24/7 pastor. Before long, you realize your health is compromised.”

For Davis, balancing his commitments to church and family formed a tangle of stressors. Managing congregational conflict, counseling church members, visiting the sick and maintaining ties with the larger community was only part of it. At home, Davis and his wife struggled financially putting four children through college.

“I was not giving myself proper time, as well as maintaining a watch on my health,” he said. “I don’t smoke or drink. Food is my problem. It’s a behavioral trigger I have to be mindful of.”

The program also includes workshops to remind pastors that in taking human form Jesus was declaring that the body is something to be taken care of. This is a point pastors tend to forget.

“Pastors are the vessels into which God pours God’s grace to be given away to churches,” said the Rev. Ed Moore, director of educational programs for Duke’s Clergy Health Initiative. “If they are not healthy, they can’t give it away.”

During one workshop, Moore blesses the clergy’s hands to remind them of the ways their ministry is bound up in flesh and bone, just as Jesus’ was.

Beyond the educational component, Davis knew he needed a more structured reinforcement to stay on his diet. This time he tried something counterintuitive: he shared his struggles with church members — first a select few who he knew struggled with weight loss, then the Bible study class, then the entire church.

He explained that he would no longer join them for meals at church (Optifast requires substituting shakes and health bars for most meals) but that he would be there for fellowship.

To his surprise, he found that members not only understood his challenges; they were willing to offer support, encouragement and accountability.

They were the ones who came up with the weekly bulletin challenge.

“I made so many people aware, it was like they were holding my hand, saying, ‘OK, let’s go, preacher,’” Davis said. “I was grateful and humbled.”

On the path to weight loss and wellness

After preaching three sermons on Sundays, he used to take Mondays off to rest his ankles and knees, so great was the added pressure of standing on his joints.

After a few months, his blood pressure dropped and he no longer needed medication.

More recently, he noticed his heart beating more slowly. (That’s because it doesn’t have to work as hard, his doctor told him.)

Davis’ weight loss success is celebrated at Spirited Life, where the average clergy member has lost 12.4 pounds in six months. One other pastor in the program has lost and kept off 96 pounds. Davis’ accomplishment losing 135 pounds has been nothing short of remarkable.

His journey is far from over, and he knows the pitfalls ahead.

“He’s going to have to do very difficult work to continue to lose weight and sustain the weight loss,” said Proeschold-Bell.

Davis admits he has days when he could devour a can of roasted peanuts (his favorite food). Instead, he turns to a bowl of fruit or munches on a carrot.

“It’s a lifestyle change,” he said. “You can never go back to eating the way it was before. You must maintain an exercise dynamic and an eating regimen.”

But Davis also knows that the rewards of weight loss extend well beyond the physical. It has improved his relationships with his wife and children, too.

At the time of his marriage, 25 years ago, he weighed 245 pounds and ran five miles a day. But repeated weight loss failures took a toll on his marriage.

“It was wonderful to see him get to a place where he wasn’t cheating and I knew it was for real,” said Rematha Davis. “It was something God instilled in him.”

His four grown children have also delighted in his progress. They were among the chief reasons he started his diet so he could enjoy his retirement with them and his five grandchildren.

A community of support

Day to day and week to week, members of Davis’ two churches have formed a web of support that has allowed him to stick to his goals.

That support has taken several forms.

There are the compliments and gentle ribbing that let Davis know people are thinking of him. Ralph Williams, a Bailey member, greets him with statements such as, “Here comes the thin man.”

Williams said Davis’ challenge motivated him to lose 20 pounds himself.

There’s the common-sense advice. Jennifer Bullard, who participates in Weight Watchers, passes on information she gleans from her meetings. Recently, she showed Davis an activity monitor she bought that helps her track her physical motions something Davis says could be useful to him as well. He recently invested in a stationary bike and works out at the YMCA four times a week.

Finally, there’s the heart-to-heart sharing. Josephine Barnes, another member, likened the encouragement of hearing others’ personal narratives to her own experience of suffering breast cancer and swapping stories with others going through the same ordeal.

“We’ve got this thing we can talk about that nobody else knows about,” Barnes said. “It’s like that.”

The breakthrough for Davis was overcoming the isolation that sometimes prevents pastors from sharing their lives.

“Often, congregants expect pastors to be holy people,” said Proeschold-Bell. “A lot of pastors feel they can’t talk to anyone else.”

Davis too used to shrink from sharing his struggles for fear it might stall or even hinder his professional advancement.

As a sign of the distance he’s traveled, Davis announced last week he was starting a weight-management group at church to help hold him and other dieters accountable.

Once he got over the pride, Davis said, there was no going back.

“It’s been good to admit you need help,” he said. “Once I was able to face my failures in public and make my confession known, to my surprise I found open doors of support and encouragement and positive reinforcement I was not aware of. It has become an added bonus for me. That has been a new staying power I didn’t have before. It has encouraged me to continue on my journey.”

This was first published in Faith & Leadership. See original article by by Yonat Shimron here.